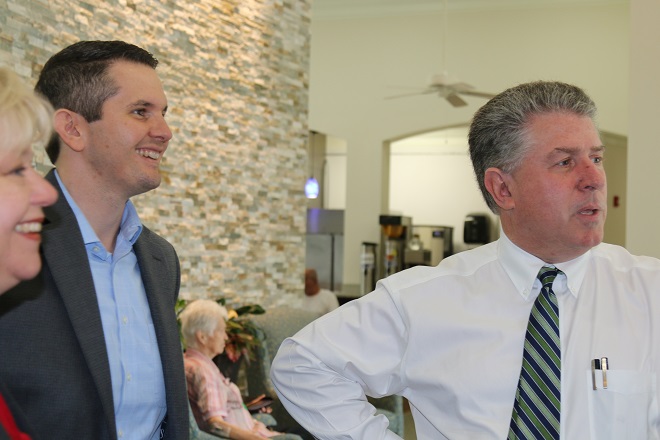 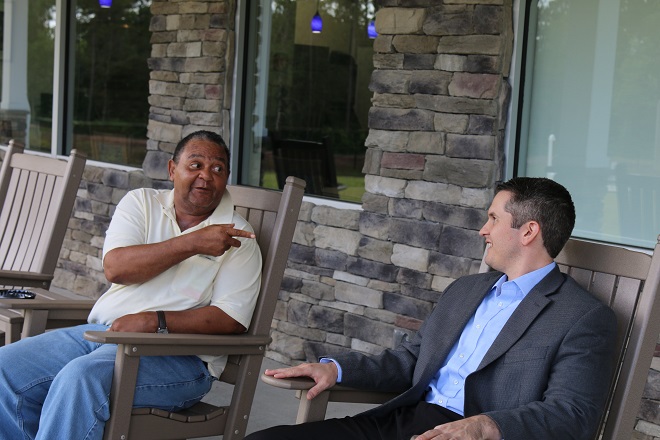 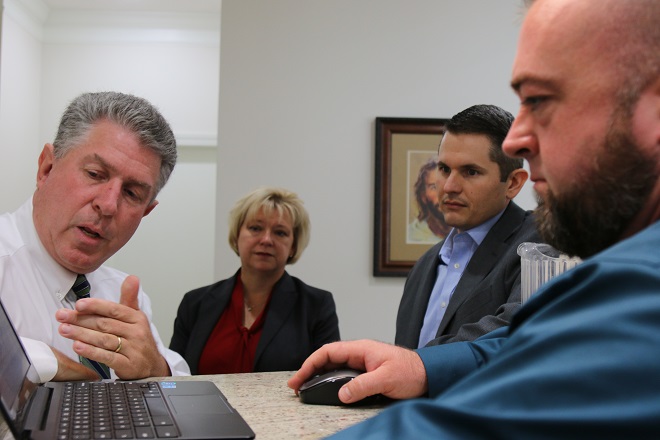 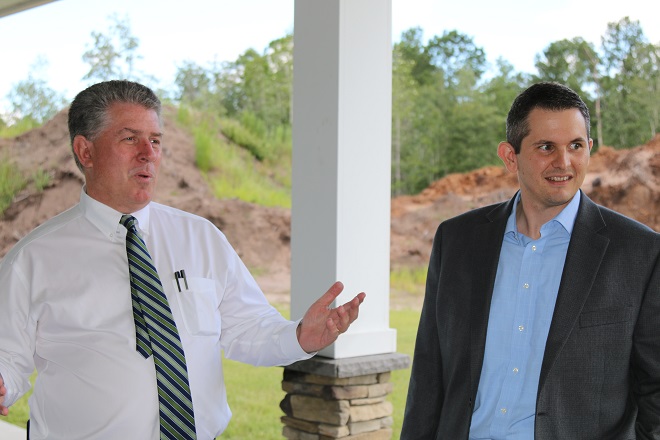 Dayspring Senior Living has completed construction on a 10,165 sq. ft. assisted living facility on US Hwy 1 near Hilliard that offers for the first time in Nassau County affordable accommodations for seniors. The new retirement care center also provides an economic boost for the community with a range of new jobs, including administrative and service positions.

A ceremonial opening for the $1.4 million building project was held Thursday. Doug Adkins, who owns and operates the facility, said the 32-bed facility will provide traditional medical care for seniors with a specialty focus on congestive heart failure and diabetes.

“We think it will be a place of rest and comfort,” said Mr. Adkins, who also operates Dayspring Village, a 94-bed limited mental health assisted living facility serving adults with schizophrenia and schizoaffective disorders. Dayspring Village is also located on US 1, about a mile or so north of the retirement center.

Mr. Adkins said the retirement center is the first of its kind among the state’s 32 rural counties and fills a need for a growing population of people over age 60 who cannot live safely on their own. “Who is going to care for them?” he said. “This is a real solution.”

Shad Haston, Chief Executive Officer of the Florida Assisted Living Association, attended the event and said that DaySpring Village will serve as a model for assisted living facilities around the state. The organization, he said, represents 600 members and some 3,080 facilities.

“I think a lot of people will come here and see how it’s done,” said Mr. Haston. “This is more like a home environment.”

Architect Randy Rice of Rice Architecture, LLC in Fernandina Beach designed the one-story facility with a center entryway flanked by wings housing the residential accommodations. Windows atop both sides of the open two-story foyer fill the reception area with natural light. The space features an earthy palette, including creamy white paints, sandy colored stonework, and dark wood furnishings. There is a small sitting room off the entry as well as private meeting space and the dining area, complete with wood tables and upholstered chairs, is tucked behind a partial wall covered with stone. There is a pretty view of trees and a retention pond as well as access to a back patio where, Mr. Adkins said, tea and scones will be served each day at 4:00 p.m. — a tradition taken from his family’s English roots. The facility is also being referred to as the ‘James Building’ after a familial name, he said. The open kitchen is set-up cafeteria-style and the coffee pot is easy-to-reach. The retirement community sits on 36-acre site and there are plans to build a nature trail winding around the property, said Mr. Rice.

Event attendees included VIPs from around the county, including State Representative Janet Adkins, who is Mr. Adkins’ wife, Sheriff Bill Leeper and County Commissioners George Spicer, Steve Kelley, and Danny Leeper. Former City Commissioner Sarah Pelican, who serves on the Nassau County Economic Development Board, was also present. Mr. Adkins gave special thanks to Tracy Nazzaro, a professional business consultant who previously ran the Small Business Development Center at the University of North Florida to help people in Nassau County launch or expand businesses. Mr. Adkins also thanked employees and said they are the operation’s biggest strength. “At the end of the day we get it done,” he said.

The facility opens less than a month after Hurricane Matthew brushed the coast and caused widespread evacuations on Amelia Island and low-lying inland areas. The evacuation included assisted living facilities and nursing homes on Amelia Island. Mr. Adkins was eager to point out that the facility is 100 ft. above sea-level and was not in an evacuation zone. The facility also has its own water plant that can provide up to 108,000 gallons of water daily, he said.

The retirement center is expecting residents to move-in this week and applications are being accepted, said Mr. Adkins, who said there are discount “founder” rates for the first 16 beds starting at $2,250 for single rooms. The $2,000 admission fee will also be waived under the founder program, he said. Rates include meals, laundry, fully furnished rooms, and access to high-speed internet. Rooms range in size from 149 ft. for a single room, 175 ft. for a single or double room, and 190 ft. for a single or double room. Mr. Adkins said the facility will be working with residents who are eligible for Medicaid as well as private pay residents.

Mr. Adkins said that rooms won’t have numbers and will, instead, be named for trees and flowers: “We want this place to be home.” 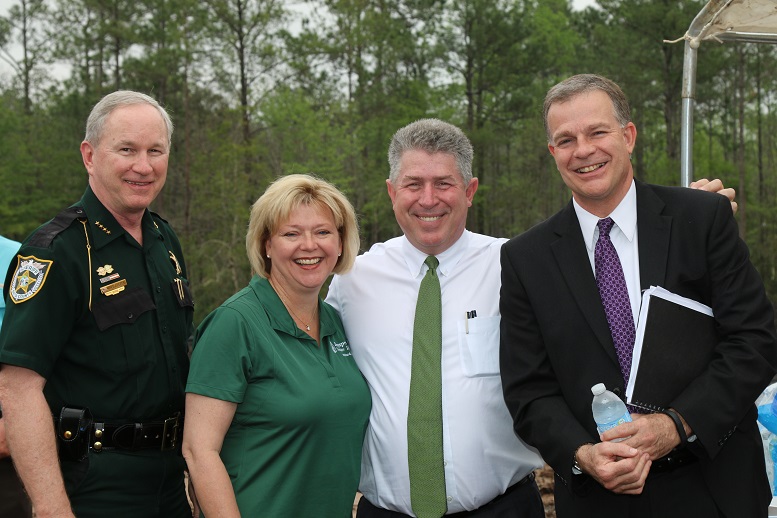 “We are excited to announce at this ground breaking event an innovative approach to senior housing for low income seniors in Northeast Florida”, said Douglas Adkins, CEO of Dayspring Senior Living, LLC.

“Florida anticipates a rapid rise in the number of elders over the next 20 years will challenge Florida’s resources for aging, especially in rural communities.  The median age in Nassau County was between 40 to 43 in April 2013.  It is expected that Florida’s population aged 65 and over will represent 24% of the total population in 2030.  It’s expected that by 2030 the work force in Florida will contract due to more workers retiring and fewer younger workers coming into the workforce, this will propel a need for new approaches to handling problems associated with aging.  You can anticipate that 21% of the seniors will have difficulty with walking, 13% problems with hearing and another 14% problems with independent living.”, said Adkins.

“This new facility will include the latest point of care technologies to help improve the management of chronic disease conditions that are often at the center of debilitating conditions that result in the need for skilled nursing care and institutional care.  We have created a campus style concept that will create a real sense of community while ensuring the homelike characteristics that are vital to the principles of home and community based care.  This new campus will offer residents and their families a wide range of options and price points that will ensure their needs are met in a setting that best fits their lifestyles, needs and preferences.”, said Adkins.

“We will have a spacious 36 acre campus that will feature extensive opportunities for walking and being able to engage the environment in a safe and meaning manner.  Our plan calls for outdoor destinations and living spaces that will be connected with the latest in electronic surveillance and call response systems.  The campus will allow residents to move from apartment style living arrangements to indoor facilities and will allow residents a choice of private and semi private accommodation all within an array of affordable price points.”, said Adkins.

“When completed the campus will feature 180 licensed assisted living facility beds that will be divided among 7 separate buildings.  Additionally, the campus will feature a 40 person adult day care facility for those families that need help caring for a family member during the day or evening that will operate from 6am to 11pm seven days per week.  The adult day care program will offer an array of options and will include a wellness program and exercise facilities and socialization programs.  The campus will also include a chapel and offices for the more than 80 employees that will be employed at the peak of campus occupancy.”, said Adkins.

“ We are grateful to our partners, Jacksonville Bank and Gulf Coast Biz, for their dedication to the $2.2 million in financing for phase I of this important project.  We have many partners to thank and look forward to the opportunity to recognize them for their contribution to this important step forward for ALF Care in Florida.”, said Adkins.

Attending the 1pm event on Friday March 20th will include Sheriff Bill Leeper, State Representative Janet Adkins, County Commissioner Steve Kelley and other local county and state officials.  The event is open to the public.  To RSVP please contact deanna@dayspringvillage.org or call 904-845-7501 – For more information you can visit www.dayspringseniorliving.org